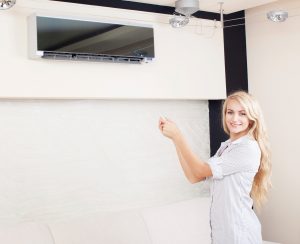 Most of us are used to the traditional centralized air conditioners used in most homes, and it’s not hard to see why. They’re effective and dependable, and for most homes they do the job admirably. But what about homes that can’t support a centralized system, or for whom a centralized system is more trouble than its worth? For such homes, we recommend ductless mini-split air conditioners, which take a very different approach to the challenge of keeping your home cool. How do they work? And more importantly, are they right for your home?

Multiple Small Units Instead of One Big One

Centralized air conditioners cool the air in one single location in your home, then blow the air to the various rooms using a system of ducts. It works well because it’s comparatively simple, and with the bulk of the complex equipment located in one place in your home, it’s easy to maintain and repair.

Unfortunately, not every home can support such a system. Houses built before the advent of air conditioning, for example, may lack the crawlspace required to support air conditioning ducts. Other homeowners are able to use centralized air, but struggle to keep their homes comfortable because they’re too large or feature unusual architectural quirks.

In those cases, a ductless mini-split system makes an idea solution. Instead of one unit, the system entails multiple smaller air handlers placed throughout your house. Each unit is charged with cooling one room or section, and the controls of each unit can be operated independently of each other.

Installing a new ductless mini-split system often costs more than a centralized system, since the technician needs to set up multiple units instead of just one. In exchange, the system delivers three distinct benefits, which often offset the cost of installation:

If ductless air conditioning sounds like a good fit for your Columbus, OH home, call the friendly professionals at Quality Air Heating and Air Conditioning.